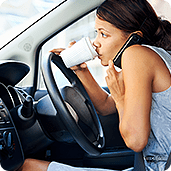 A driver distraction is anything that diverts a driver’s full attention and focus from driving safely.

It doesn’t take a highway safety scientist to predict that cell phone use is the most common driving distraction of emerging 21st century technology. But many responsible drivers are surprised to learn that cell phone dialing, talking and listening all cause nearly equal numbers of crashes. Why? Because even though dialing is definitely more dangerous when removing a driver’s eyes from the road, it occurs less often than talking or listening.

In Georgia in 2010, the legislators approved a ban on sending text messages while driving for all drivers. Senate Bill 360, now a state law, states in part “no person who is 18 years of age or older or who has a Class C license shall operate a motor vehicle on any public road or highway of this state while using a wireless telecommunications device to write, send, or read any text based communication, including but not limited to a text message, instant message, e-mail, or internet data.

Those in violation of the law are subject to fine of up to $150 and one point on their license.

Minors (those under 18), are prohibited from using any cell phone or computers while behind the wheel of a moving vehicle, regardless of whether or not the cell phone is a hands-free device. Violators are also subject to be fined up to $150, as approved in 2010 as House Bill 23.

HB 23 also included a possible license suspension for teen drivers who violate the law. If the under 18 driver was in a wreck and cell phone use was found to be a contributing factor, the law allowed the fine to be doubled and guaranteed a license suspension. HB 23 passed on a unanimous vote as the legislature wound down in the spring.

Distracted driving of talking on a cell phone or texting is dangerous, illegal and can carry a fine.